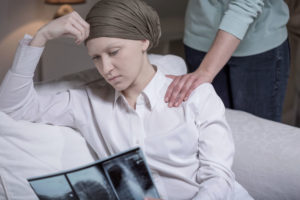 Current problems in cancer and anticancer therapies are very acute these days. One of the most common cancers for both men and women is the lung cancer, which is by far the leading cause of cancer death each year. The American Cancer Society’s estimates for lung cancer in the United States alone for 2018 are:

To date, radiotherapy is one of the common ways in managing lung cancer, however it has serious limitations associated with the radiation-induced lung injury (RILI). As increased attention on stem cell therapies in regeneration medicine, some researchers have attempted to overcome RILI limitation by utilizing mesenchymal stem cells (MSCs) due its remarkable ability to self-renew and differentiate into a variety of cell types. MSCs are the most studied stem cells that likely have the optimal outcome for regenerative medical research. Moreover, MSCs can be easily obtained from several adult tissues, including bone marrow, umbilical cord, and adipose tissue.

In order to establish MSCs-based therapy for RILI, researchers conduct studies where MSCs can be delivered to the lung and then secret paracrine factors needed to regulate the microenvironment. Furthermore, numerous of studies have demonstrated the following advantages of MSCs therapy:

·      Upon systematic administration of MSCs, they could migrate to sites of injury, differentiate and recover the damage tissue;

·      MSCs might be a positive regulator of the immunological response, providing anti-inflammatory phenotype.

Kursova et al. has reported that 11 patients (four breast cancer patients and seven lymphogranulomatosis patients) with RILI were treated with MSCs autotransplantation. After one year of treatment, the MSCs-based therapy displayed an astonishing result where did not promote the progression of the oncological disease. Unfortunately, due to the lack of additional control group in the study, it was hard to demonstrate full regenerative effectiveness of MSCs-based therapy for RILI. However, this study indicates that MSCs-based therapy is safe for transplantation in the human body injured by radiation. In conclusion, MSCs-based therapy requires more time for study and development, however it has a great potential in regenerative medicine.

Mira Swave, M.D. is a specialist in the field of Regenerative Medicine.
Share the knowledge

How PRP Can Help With Treating Chronic Pain

Why Sleep is the Secret to Unlocking Your Health

High Cortisol and the Risk of Alzheimer’s Disease